Hello, and welcome to Ballroom Genie! We are Chris and Joanne, and we made the site. This is how it happened…

We are ballroom dancers from Cambridge, UK, and we like to work things out for ourselves between lessons. We’ve used DVDs and YouTube videos to help answer questions, but it can be hard to see exactly what’s going on – we found that the lady’s legs are usually hidden, and online videos often don’t quite show the angle you need to see.

Luckily, we’re professional web developers, and after one particularly frustrating practice, we thought of a way technology could help. Computer-generated animations of steps would let us watch from the angle we needed to fix the problem we were working on at the time, in slow motion, and without anything blocking the view. On top of that, if we put the videos online, we could access them from anywhere. However, this was all just a nice idea at the time – smartphones and tablets weren’t common and we knew little about motion capture technology (except that it was used in very expensive films).

The idea didn’t go away though, and over Christmas 2009 we were encouraged by some family members who turned out to know about the technologies involved, and we made contact with a motion capture studio. We also realised that modern phones and tablets were the ideal way to use a site like this, and then we persuaded Jonathan Crossley and Lyn Marriner to dance for us. That meant that we could start putting our idea into practice, and after asking around and getting lots of positive feedback, we started work. We launched Ballroom Genie in August 2013 with Waltz and Quickstep figures.

After a few months we added Viennese Waltz, then Tango for our first anniversary. Then we visited the motion capture studio again with Alexander Zhiratkov and Irina Novozhilova. In September 2015, we completed the set of main Ballroom dances with Slow Foxtrot.

As our membership grows, so does our library of steps – from 30 when we launched to over 250 now. We also offer expert advice alongside the videos, working with Hazel Newberry, Benoit Drolet, Jonathan Crossley, and Tony and Amanda Dokman (so far), and that resource is also growing. As well as adding more steps in all of the dances, we have lots of ideas for extending Ballroom Genie, many of them influenced directly by members’ requests. 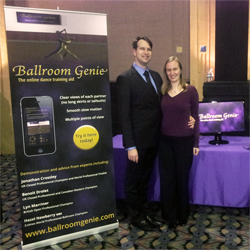 We’d love to hear your comments and feedback, and we’re always happy to answer questions – just contact us to say hello!

Have you tried it for yourself?

Ballroom Genie can help you understand better and improve faster. Try the demo to see how it works for one step.

Find out about updates

Get e-mails about new videos and tips. Find out what members get. Learn about free content and exclusive offers.

We use MailChimp to manage our e-mail list and this button takes you to their site. We respect your privacy and you can unsubscribe at any time.